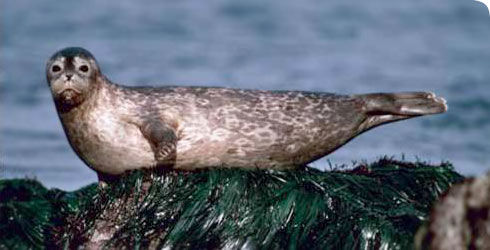 Seals, sea lions, and walruses are collectively referred to as pinnipeds (Latin for wing-footed). Pinnipeds are divided into three families: otarids (sea lions and fur seals); phocids (hair seals, also called true seals or earless seals); and walruses. Most pinnipeds feed on marine species such as fish, squid, and other invertebrates (Burt and Grossenheider, 1980). Unlike fur seals, which are protected from the cold marine environment by a dense layer of underfur, phocids rely only on a thick blubber layer for insulation (Pierotti and Pierotti, 1980). Phocids include both the smallest (ring seals) and the largest (elephant seals) of the pinnipeds. The geographic range of most phocid species is from the arctic Atlantic and Pacific south to the coasts of Canada and Alaska, although some do inhabit warmer water (Burt and Grossenheider, 1980). Most phocids, with the exception of the elephant seal, do not exhibit the large disparity in size between the sexes, which is characteristic of otarids (sea lions and fur seals) (Burt and Grossenheider, 1980).